Have you felt temporarily incapacitated by the sudden loss of a family member – the sole breadwinner of the household?

It was the time when you felt as if the ground below your feet had begun to slip. It appeared as if it was all over. Life had stopped and the resume button did not seem to exist.

The Sharma family experienced this firsthand.

My friend Gunjan and his elder brother Gagan lost their father when they were in school.

Their father Prem Chandra Sharma was a General Manager in Shriram Pistons & Rings, the largest exporter of pistons and rings from India. He was in his early forties and had no history of illness. Or at least none that was known before that fateful Sunday afternoon in 1985.

Their family lived in a posh south Delhi residence, paid for by the company he worked for. So was the official car and driver. Life was comfortable, even luxurious. They would travel extensively, have meals in the finest of restaurants, and be invited to movie premieres. Till destiny snatched it all away. 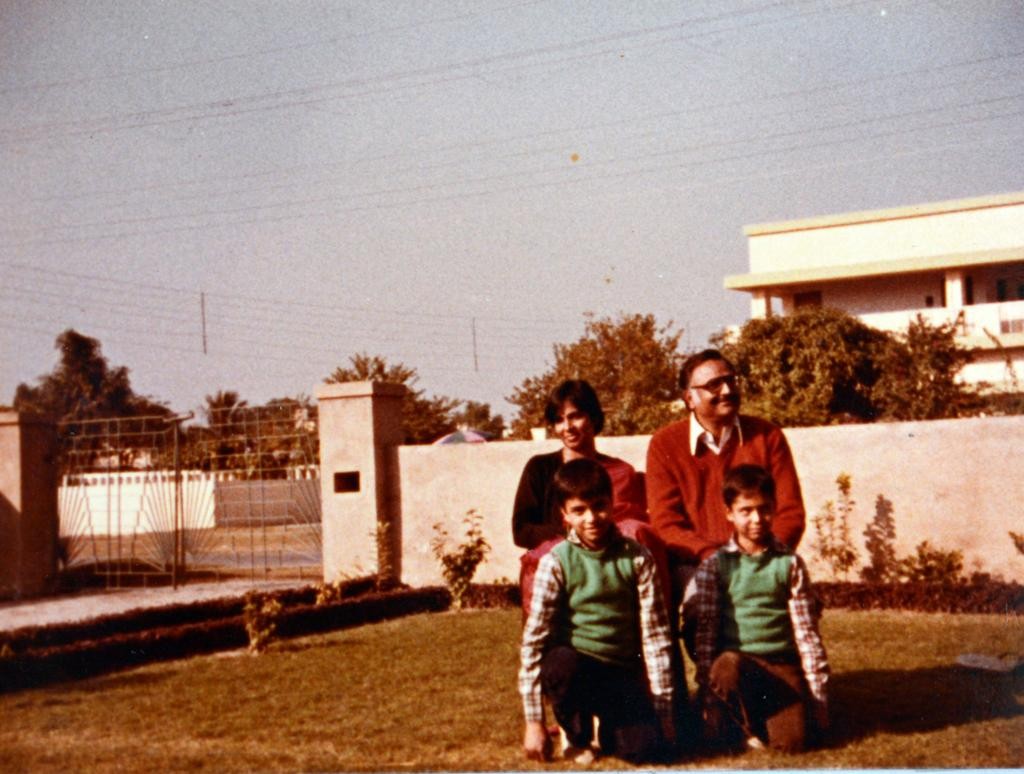 Prem Uncle was lying down on the bed after a Sunday lunch when he felt very uneasy. His sons sensed their father’s discomfort and ran to fetch a Cardiologist who lived down the lane. By the time the doctor arrived, Prem Uncle’s heart had stopped beating.

Life Changed and How

Suddenly, the family had no home of their own.

During those days, it was common to build or buy your home near retirement age. Prem Uncle was young. He had many years of service left. He would cross that bridge when he approached it.

But now, he had moved on to the other world. Unannounced.

Their family no longer had a house to live in. And no steady source of income. Except for an insurance policy, there were no investments to encash or redeem.

His wife Mrs. Praveen Sharma (who hereafter will be referred to as Aunty), decided to take charge. She didn’t know how and what she would do. But she would figure it out. Life had left her with no option.

This is her story. A story of great courage, resolute resilience, and a will to protect her sons – no matter what.

She had family support from both sides – her and her late husband. Her brother welcomed her with her sons to move into his home in Kolkata. Similar offers were extended from close relatives in Lucknow from her husband and her family elsewhere.

Aunty decided to live independently. She was appreciative of all the family support but chose to battle it by herself. She was emotional yet had immense strength of character. She saw traits of her husband in both her sons. She wanted them to be like their father. And she knew if they lived elsewhere, they would adopt and adapt to what they saw around them.

Prem Uncle was no longer physically present. But he continued to live in the mind and heart of his family. His memory provided the strength to cope.

Aunty’s world had been torn apart in one stroke. Destiny had left no time for her to grieve properly. She had to support her family, from thereon.

But what could she possibly do? She was a graduate in music before she got married. Ever since, her life revolved around her home, her husband, and her sons. She wasn’t prepared for this stage of her life.

Her brother Major General AK Sharma (now Retd.) approached the Shriram Group – the company where her late husband served in a senior capacity – with a request to employ her. After internal discussions, the Group reverted they would offer her the position of receptionist.

It wasn’t an easy offer to accept.

How do you work as a receptionist in a company where your husband used to be one of the top bosses? You were addressed as Ma’am by most employees working there. They interacted with you as the GM’s wife. Now you had to start from scratch, junior to practically everyone you knew in the same office.

Many in her place would have thought a hundred times whether to accept or not. But not Praveen aunty. She took the bull by the horns.

She knew how important it was to have cash flow every month. She was pragmatic. She realised she may not even find a receptionist’s job elsewhere anytime soon. Here, she was at least getting an opportunity.

With a job now at hand, a key mission was accomplished. She had to deal with the next challenge – a roof over their head. The company was not going to pay for the plush accommodation offered to her late husband. She needed to figure it out as fast as she could.

When Goodwill Saved the Day

The lane they lived in was inhabited by a few who felt for the family. One good soul offered to let them live on the terrace of his house (referred to as barsati in Delhi) for approximately one-fourth of the prevailing rent. He even offered to add a living room to the already constructed two bedrooms, a kitchen, and two bathrooms on the terrace.

Aunty was okay to use the remainder of the open terrace, as it was. She did not need a living room then.

From a fully furnished floor, she and her sons moved into the terrace – exposed to the extreme heat and cold of Delhi. But it did not matter to Aunty. She was grateful to find accommodation a short walk from her children’s school.

With a job in hand and a roof over their head, she knew she had to hit the ground running. She would grieve as and when she found a few free moments in her hectic life shuttling among office work, taking care of the household, and raising her sons.

The only support she had at home was Bahadur, the Man Friday of the household who had been with them for six years and had become a member of the family by then. He did not want to leave the family after Prem Uncle passed away. He realised Aunty was in no position then to pay him a salary. He suggested a way out. He would seek work in an office during the daytime and would help the family after office hours.

This arrangement worked fine for everyone.

Aunty worked tirelessly through the weeks, months, and years ahead. And she did a sterling job in how she raised both her sons.

By the time I met the family, the worst was behind them. They still lived in a barsati. But the children had grown up into fine young men. Destiny had severely shortened and compromised their childhood.

Gagan, by then, had grown up to be a perfect gentleman. I was introduced to the term in junior school but I fully understood the meaning only after meeting him.

Gagan joined the Merchant Navy in 1991. Each time he returned home from the ship, he would pamper his mother and brother with everything they had missed in the last six years. Eating out which had almost stopped except for sweet shops once in a while, resumed in full form. He would let them indulge in anything and everything they wished for. And even what they did not.

Gunjan is organised, and blessed with an innate sense of humour, besides great storytelling skills. He began his career in Public Relations, switched to producing content for television, and has now founded a startup that offers a first-of-its-kind product anywhere in the world.

When you visit their home, they make you feel a part of their family. Their home always has the best tea, snacks, and food. The food’s simple yet gratifying. Even before the food arrives, you feel full. Such’s the warmth and affection they transmit.

What would it have taken to live that life?

I heard stories about the long and hard struggle that Aunty underwent to put food on the table and educate both their sons. Just imagining what it must have been, is an emotional experience. My eyes well up each time I think about it.

Both her sons grew up into mature adults, well before their age. They are grateful to their mother for having seen them through the most torrid times. Their time had come to pay back. Not just in an economic sense. But for all the hardship their mother had battled to keep the ship afloat. To give her everything she needs. And deserves.

It is not easy to contemplate the life Aunty lived after that fateful Sunday afternoon. That she did and how speaks volumes of her great mental strength and fortitude.

She worked very hard and was promoted to Executive Housekeeper in charge of the floor where the top leadership had their offices.

She was not very educated in the conventional sense. But what she demonstrated through her grit and determination, is inspiring.

The loss of a breadwinner, however painful, cannot be the end of the world. The show must go on.

Praveen Aunty’s story has a lesson for all of us:

When life gives you lemons, you’ve got to know how to make lemonade out of it.

Incidentally, I have had the best lemonade ever in their home.

A Thinker at all times and Storyteller at heart. I see, I think. I hear, I think. I read, I think. Sometimes I write. Let me know what you think View more posts

4 thoughts on “How To Make Lemonade When Life Gives You Lemons?”